In case you didn’t already know, Westinghouse is the oldest name in generators. Westinghouse was the very company that pioneered the generation of electrical power from steam engines. Ever since, Westinghouse has continued to develop new power generation methods that are right at the front of technology. 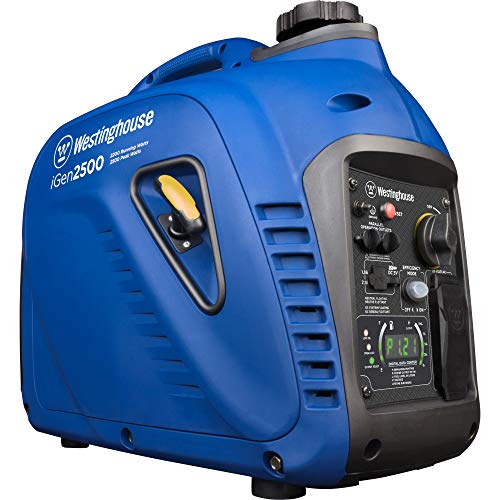 The Westinghouse iGen2500 is a powerful yet very portable generator. It’s fitted with a four-stroke engine that has a starting power of 2500 watts and can provide continuous power thereafter up to 2200 watts.

The iGen2500 is an efficient generator that can run for more than 9 hours when being used at half capacity – all from just one tank of gasoline. The fuel tank in the iGen2500 is just one gallon in size. When full, it’s still very light and is sure to keep whatever you have plugged into it running for a good length of time.

The iGen2500 can also be connected in parallel with another generator. This means that a cable can be run from the iGen2500 into another generator in order to increase the total power output and running wattage from the generator. This is particularly useful since the iGen2500 is indeed a small generator. Whilst it has not been designed to be massively powerful, the idea of the parallel connection capability is that, in the event that more power is needed, you are still covered and can have a small and lightweight generator the rest of the time. As long as the other generator that you’re looking to connect with is in the iGen series from Westinghouse, you’ll gain all the advantages of a larger generator with two smaller ones.

The iGen2500 comes with a pretty cool LED display, on which a lot of information on the generator is displayed. It shows the remaining run time, the current power output, the current fuel level, as well as the voltage. It’s also got an overload indicator, as well as a low oil level indicator.

In order to keep the generator as quiet and refined as possible, it’s fitted with a number of power dampening measures. It’s got a double insulated hood, dual quiet mufflers, as well as asymmetrical fans. Not only 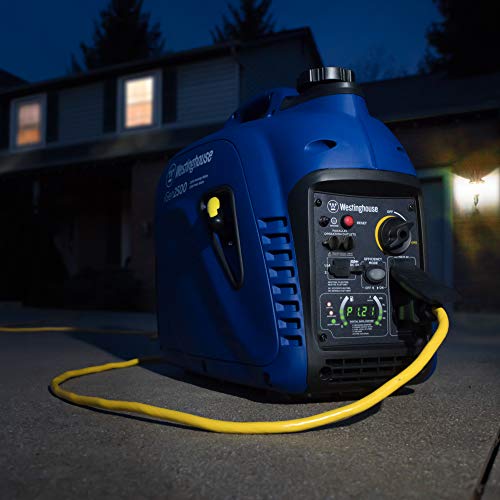 do these features keep the operating temperature of the iGen2500 correct, but they also keep it operating at a good volume and extend the life and durability of the unit. When the generator is running at a quarter potential, it only produces 53 decibels of noise, making it one of the quietest generators that we’ve ever reviewed.

The Westinghouse iGen2500 is a very lightweight and portable unit. It weighs in at only 48 pounds and has a suitcase-like handle that makes moving it anywhere that you’d like extremely easy.

Being an inverter generator, the power that the iGen2500 outputs is of very high quality. The power output has less than 3% total harmonic distortion. For reference, the power from the national grid has on average a THD level of around 6%. The power from the iGen2500 is therefore extremely suitable for powering all kinds of device and more sensitive electronics such as laptops, mobile phones, and digital cameras.