On first glancing at this article, you may well be in the position that you’re trying to work out what indeed, a PTO generator is. PTO generators are less common than other generators such as portable and inverters – they are specifically designed to be used in conjunction with a tractor.

Over the years, farming and harvesting have changed really quite considerably. It’s now become commonplace for farmers to use electricity as part of their farming and/or harvesting routine.

First off, let’s take a bit of a background look at PTO generators and what they actually are, before continuing on to look at the best that are available.

What is a PTO Generator?

A PTO generator is short for a Tractor Power Take Off generator. It is the solution to turning a piece of mobile farm machinery into something that can also generate electricity. A PTO generator uses the output engine shaft of the tractor to which it is attached in order to generate electricity. It uses the wasted kinetic energy from the engine to drive the generator, to produce an electrical current on the move.

A PTO is a great thing for a farmer or anyone with a tractor to have since it makes use of a machine that they are already running regularly anyway. For example,  if you were to be using a normal stationary generator, you may not have to start it all that regularly throughout the year. However, if it were to be attached to your tractor which will undoubtedly be used a lot more regularly, it is being constantly used and maintained as a result.

What would a PTO Generator Be Used For?

You may be wondering even still as a farmer, why would I want to have mobile power? The mobile power from a good PTO can be used to power any of the tools that you may need, wherever you may need them. As long as you can drive your tractor there, you can get the power there.

A PTO can also be used as a backup generator for a home. Assuming that you’re able to fuel the tractor (as you would need to with any other generator that you would be using regardless), you’ll be able to obtain power from it. A large amount of PTO’s has been configured to be able to do just this, with a transfer switch for added convenience.

At present, the PTO generator market is relatively new and really rather small.

Now that you’ve got a bit of a background on PTO generators, let’s take a look at the best two that are available on the market. 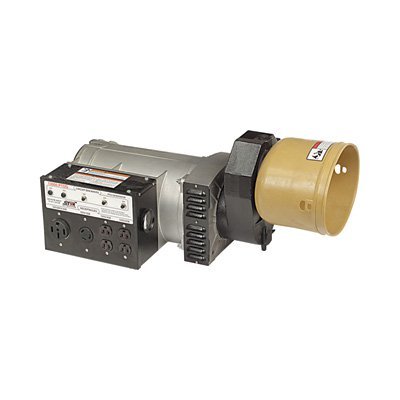 The NorthStar 13kW power take-off generator is a small yet powerful unit. It’s got a maximum surge wattage of 13,000 watts and will provide continuous power up to 12,00 watts.

It’s likely to be more than powerful enough for the large majority, if not all, mobile uses you could have for it.

It’s fitted with a single-phase, bi-directional head that’s fully lined with 100% copper windings. It’s made of metal and has a plastic shielding for added durability. The NorthStar 13kW has also got a 100amp thermal magnetic circuit breaker for added safety.

All of the features that are built into this unit are designed first and foremost with the safety of the user in mind, but also to protect the life of the generator itself. Purchasing a PTO should be an investment, a NorthStar has recognized that when building this unit. It uses high-quality materials and certainly seems like it has been built to last.

In the event of a power overload, this NorthStar 13kW unit is fitted with circuit breakers to prevent damage. 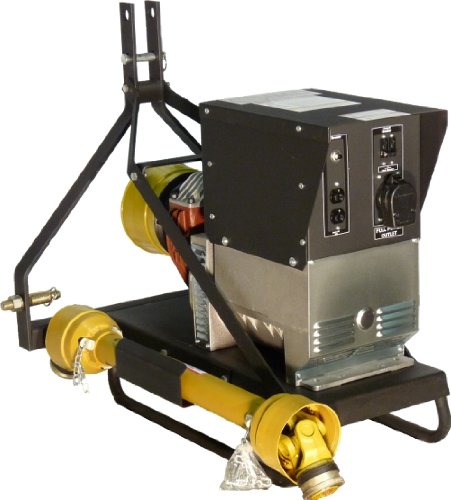 The IMDLLC 16002P is a PTO generator that truly allows you to convert a tractor into something that can generate a lot of power.

It’s extremely powerful, being able to output 30,000 surge watts, and running at 16,000 watts continually. It’s fitted with an automatic voltage regulator too, that makes the power that it outputs safe to power appliances that are more sensitive. For example, if you’re using a drill or welder that requires power with minimal harmonic distortion, the automatic voltage regulator (AVR) that are fitted within the IMDLLC 16002P will take care of this.

The IMDLLC 16002P is designed to be as lightweight as possible too, so an not to have a negative effect on the overall efficiency of your tractor’s engine. To achieve the lightest weight and thereby best performance, it’s encased in lightweight aluminum and steel. The use of aluminum here provides durability and weight reduction.

Just because the 16002P is a generator that’s fitted to a tractor engine, it doesn’t come without features that make it as easy to use as possible. It’s fitted with a 3-bar LED meter. This LED meter displays to you how much power is being outputted in amps, hertz, and volts. This information is extremely useful to know to avoid overloading the generator.

The 16002P comes with a number of extra features that do not tend to be found on more basic PTO generators. It comes as standard with a magnetic circuit breaker as well as individual circuit protection. These are essential features for absolute fire safety.

There’s no doubt that the NorthStar 13kW is a very good quality power take-off generator. It’s well priced, relatively lightweight, and durable too. It’s also included with a number of features that make for a very safe unit. However, it could be a little more powerful in our opinion.

The 160002P is the more powerful of the two PTO driven generators that we have here on our list. In our opinion, it’s the best too. The 160002P is well-reviewed, reasonably priced, packed full of safety features, and even has some nice additional features such as an LED meter. It’s able to push out a huge amount of power and isn’t likely to ever leave you in need of more.