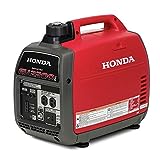 To be as good as a portable generator can be, it must not only have a strong engine and be of high build quality, but it must also and have the ability to stand up to the test of time. Not only is the EU2200i well built, but looks great, and is capable of pushing out an impressive 2200 watts of power at its peak – an increase of 200 on the model that came before it.

Although it has been improved in many ways compared to the previous EU2000i, this generator has managed to retain those qualities that users love – it has stayed lightweight and is still extremely portable at just 47 pounds.

It pumps out 2200 watts of surge energy, and is capable of providing 1800 watts of continuous energy. As a result, it can easily handle just about all that you may decide to throw at it! Not only this, but if you do find any job that requires over 2200 watts, you can simply double up via the parallel connectivity this generator offers and add another EU2200i. Even when you’d rather spread a larger load between two generators, this is a feature that can prove extremely useful.

Another big plus point about this generator is that it’s also an inverter generator on top of being portable. The inverter with which it has been installed means the electrical output is as smooth and safe as possible. There is minimal harmonic distortion thanks to advanced sine wave technology. All of which means you can rest assured you won’t have any worries about damaging your smaller more sensitive devices when it comes to charging them. These include digital cameras and mobile phones.

We also have a full review of the Honda EU2200i. 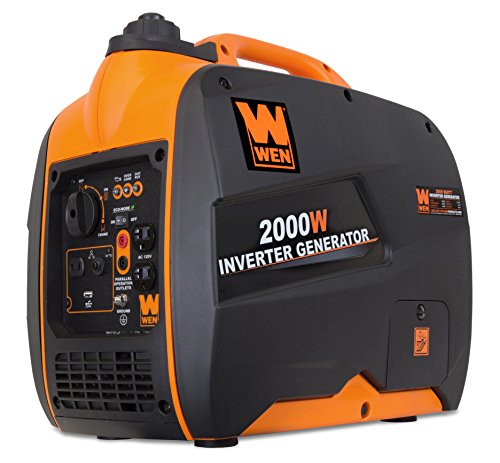 The WEN 56200i is well-known for its quiet operating volume. This 56200i from WEN is able to produce clean, smooth, and high-quality power continually at 1600 watts. This is because it is fitted with an inverter – it’s some of the safest and most versatile that can be obtained from a generator.

The 56200i is very portable indeed, weighing in at less than 50 pounds. It’s easy to move from around, with a carrying handle to add to its light weight.

The WEN 56200i is a very refined unit that runs at a mere 51 dB when being used at 25% capacity. When operating at three quarters capacity, the 56200i only produces 55 decibels of noise.

It’s got a small and power-dense engine that’s 80cc in size, it’s also both EPA III and CARB compliant. It manages well to push out 2000 surge watts and 1600 continuous watts of power.

If you’re interested in the WEN 56200i, there’s a full review available here! 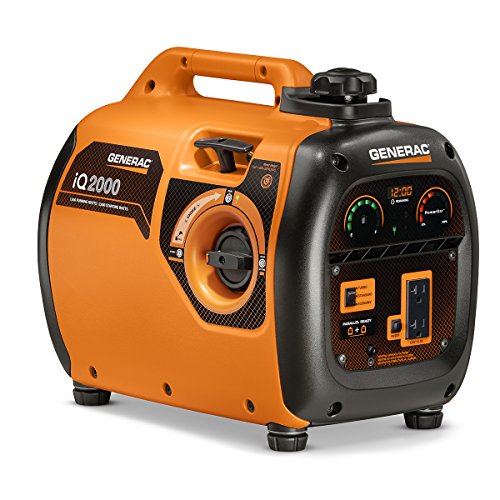 The IQ2000 from Generac is a very quiet piece of kit indeed. Most generators available for purchase are comparatively loud – especially when they’re pumping out their maximum power potential.

At a tiny 46.2lbs, this Generac IQ2000 is amazingly portable. It’s fitted with a comfortable carrying handle that makes moving it around easy, and it can be used anywhere that you’d like.

Firing up the IQ2000 poses no problems whatsoever! A very durable recoil starter gets it running. You have total control with a dial on the unit’s left side that allows you to choose the running power. It also enables you to start and stop the unit. In terms of usability, this is great – especially when you’re wearing gloves or can’t operate small intricate buttons. It offers easy access along with precise control!

The IQ2000 from Generac comes with a variety of different operating modes – standard, economy, and turbo, all of which are pretty self-explanatory. However, there are advantages and disadvantages to each setting.

This Generac unit is really good for keeping users informed about all they could ever need to know while the generator is running. There’s a fuel gauge, which you would think should be standard but is, in fact, not included on many generators. This is great because it means there is no need to guess when the generator is about to run out of fuel. As a result, you will always have power.

The IQ2000 from Generac also comes with a wattage meter, which shows the number of watts you’re using with whatever you may have plugged into the generator, along with the percentage of the generator’s potential that you’re making use of.

To accompany these very handy features, there is an oil warning system mounted on the generator’s front. When any of these lights illuminate, you know your unit is low on oil and needs topping up. In the event that the oil level in the IQ2000 gets low, it will halt the engine operation and prevent damage being inflicted on the engine. The IQ2000 also has an extremely informative control panel. 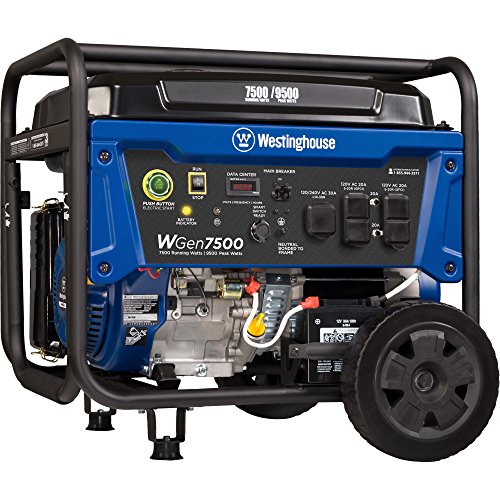 The WGen7500 from Westinghouse is one of their most recent models. It comes with a wealth of features, and a massive 7500 watts of continuous power on tap. It’s also got 9000 starting watts. Considering that the WGen7500 is indeed a portable generator, it’s power capabilities are truly astounding. This generator is the most powerful from our top 5 portable generators.

Powered on gasoline, fuelling the WGen7500 is quick and easy. It will hold 6.6 gallons of gasoline, and will be able to make this last for up to 18 hours. If you lose power for a fair amount of time, you won’t need to worry at all.

The WGen7500 is kitted out with everything you would expect from a high-end generator such as this one. As well as having typical useful features such as a fuel gauge, it’s got an effective low oil detection system. As well as having overload protection on all power outlets, it’s fitted with a twist-lock outlet that’s perfect when you need it.

Westinghouse is one of the oldest and most respected names in electricity. The WGen7500 does this name proudly, with its quality being just as high as you would and should expect. 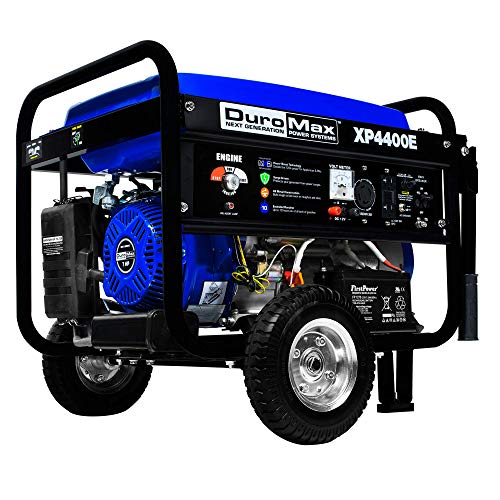 The XP 4400E is a portable generator that offers true value for money. It’s powerful and is able to offer a number of features that its more expensive counterparts do. As with every portable generator, there are bad bits and there are good bits. We’re going to take a quick look at both of these, and you’ll see exactly why the XP4400E is more than deserving of a space on our list of best quiet generators.

DuroMax is a well-known name in power generation, and this generator is an example of how far both portable generators and DuroMax have come.

The XP4400E will put out 4400 watts of starting power, and 3500 watts of continual running power. This is more than enough wattage to power just about any appliance that you could throw at it, including power tools and large heavy kitchen appliances. It holds 4 gallons of fuel and will keep going at half of its load for more than 7 hours.

When operating at maximum capacity, the generator only runs at 69 decibels = not even all that much louder than two people talking!

After reaching this point in the post, you’ve probably realized that there truly is a wealth of different types of portable generator, as well as features that are on offer from each. The portable generator that you choose should be based on your needs – what’s great for one person may be utterly terrible for another.

The Honda EU2200i is truly the all-around generator in this category. It provides great portability being light and easy to carry and looks great. It’s also fitted with a very good inverter meaning a clean, smooth, and safe power output.

The 56200i from WEN is well known for being a very good inverter generator as well as very portable. The fact that it’s so portable and has a high-quality power output is great – given this generator is more likely to be used for smaller devices, it’s the perfect combination.

The Generac IQ2000 is extremely quiet and extremely lightweight. It runs at 53dB and weighs only 46 pounds.

The WGen7500 from Westinghouse is the most powerful unit of the 5 portable generators we have reviewed. It truly is an absolute powerhouse that pushes out 7500 watts, whilst still being portable. If you need a lot of power on the move, this is the one to go to.

The DuroMax XP4400E is a generator that offers great value for money. If you’re in the market for a generator on a bit more of a budget that doesn’t compromise on build quality or features, the XP4400E is a very sensible option.