Cummins is a company that prides itself on its heritage. It has been a world leader in the designing and making of generators for many years. It specializes mainly in larger generators, such as standby and industrial units. Cummins does not make a great deal of smaller, more portable units.

Anyone that is purchasing a Cummins Onan unit knows exactly what they are looking for – a generator that’s powerful, built-to-last, and something that is worth the investment that it’ll require them to make in it.

Cummins is very well-known for the quality of its RV generators. The Onan line that’s made by Cummins is a fine representation of this reputation. The Onan generators are designed to power your RV. Cummins has been making generators to power RVs and mobile units for more than 80 years. Over the years, they have expanded the technology used within their units, as well as the means that are used to fuel them.

The Onan generators from Cummins come in a variety of fuel types and with a number of different advanced features. They are made in fuel types including diesel, liquid propane, and gasoline variants.

In this article, we’re going to take a look at some of the Onan generators available that we believe to be the best, each for different reasons. We’ll provide an unbiased opinion on each, as well as give an input as to what we think the best and worst features of each product are. 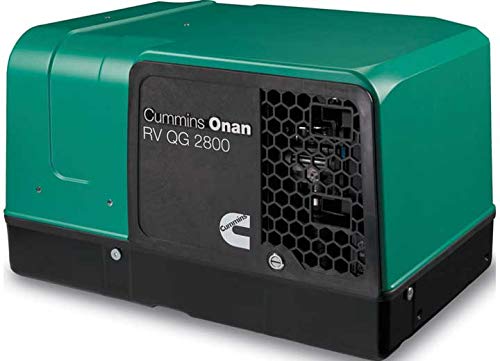 The RV QG 2800 Onan Generator is a unit that’s very well-priced. It’s the smallest of the Onan line from Cummins and is very affordable.

That said, the affordability of this generator should not be a factor that puts people off. Even though it is very well-priced, it still boasts the build quality, features, and power of any other unit with the Cummins name on it.

It’s a dual-fuel generator, meaning that it can be fuelled in this case by either gasoline or liquid propane. This is a great feature to have, particularly on an RV generator. When camping or using your RV, propane is a far better fuel to use. It’s more readily available at campsites and is most likely what your RV itself runs on too for gas supply.

Being a Cummins generator, the QG2800 is a unit that’s got a lot of advanced technology built in. It’s able to self-diagnose problems which it may have – similarly to how a car does this. It has a microprocessor built-in – this monitors the engine and generator and gathers various pieces of data on it. If something were to break, the processor would detect this and report back to the user.

The QG2800 is a lightweight and refined unit too. When being used at half load, it runs at only 70 decibels – not much louder than a regular conversation between two people. This level of sound also meets the National Park Service sound level requirements.

It’s also only 125 lbs in weight. Whilst this isn’t exactly light, it’s not too heavy either and means that the generator can be relatively easily moved around. It’s very easy to maintain too, with all parts being accessible from one side, known as “single-side service.”

The QG2800 has a running wattage of 2800 watts. This is more than powerful enough to run the large majority if not all of the appliances within your RV. It’s fuel efficient too consuming only 0.2 gallons of gasoline per hour and comes with safety features such as circuit breakers and low oil shutdown system. 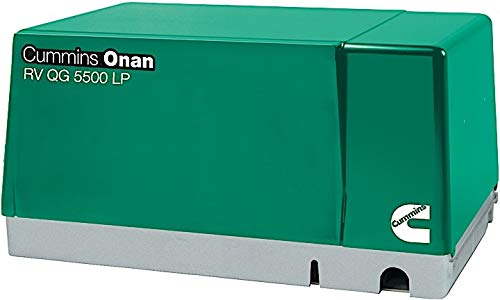 The Cummins Onan QG5500 is the quietest generator in its class. It is renowned for the extremely low levels of vibration that it has. Like others in the Onan range, it’s able to self-diagnose any problems that may occur within it. This speeds up troubleshooting and servicing considerably.

It’s an extremely powerful unit, with 5500 watts of power available. When connected to an RV, it’s more than capable of running more than one large and demanding appliance at the same time. For example, it’s able to run two air-conditioning units or heaters simultaneously whilst still having power left over.

It’s dual fuel too, meaning it can be powered by either regular gasoline or liquid propane. This causes the generator to be very versatile, and great for RV-use. The life of the engine is also longer than other engines that run solely on gasoline, due to the fact that propane doesn’t leave carbon deposits in the engine.

Running at only 69 decibels when at half load, it’s by far the quietest generator in its class. The heavy-duty and heavy weight of the unit makes it a very solid and sturdy unit, no matter where it is being used.

The QG2800 is an exceptionally refined and high-quality generator. It’s designed primarily for powering an RV, and with a wattage of 2800 watts it’ll be able to power large appliances, but perhaps not more than one of them at once. This should be considered, should you be planning on powering say, a heater and oven at the same time.

The GQ5500 is a very powerful generator. It’s the quietest in its class, and it has on offer probably the most advanced features that we have ever seen on a generator. It’s of high-quality and has the power potential to keep two large appliances going at the same time to have power left over. If you’re looking for a reliable, well-grounded RV-generator, it’s fantastic and in our opinion, the best buy.