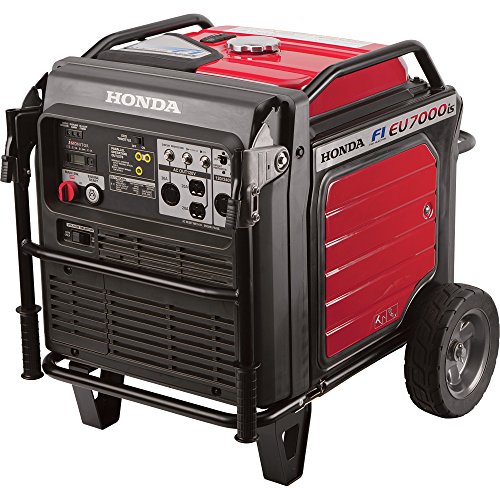 Looking for a reliable generator that’s both powerful and well-priced can be a challenge. The market is huge, and there’s a lot of products that should be avoided if possible. It’s important to know exactly how to identify a good generator from a bad generator, particularly when you’re looking to spend your money.

Whilst some other generators, such as those that are cheaper and lighter, can be great for light use, they tend not to be up to the task of constant usage. The EU7000iS is a generator that’s been designed to be durable, to be used heavily, and to give you peace of mind that you’re going to have power no matter where you are.

The EU generators, short for the “Euro Series” are a line of generators from Honda that are designed to be powerful, hardwearing, and reliable. They’re regularly seen in building sites, and in the arsenals of those that are extremely reliant on a source of power at all times. In this post, we’re going to take an in-depth look at the EU7000iS and what It has to offer, including its key features, its power potential, how efficient it is, and how well it suits use as an all-round generator. We’ll also examine those parts that users have advised could be improved, or that they’d like to see changed.

Primarily, the EU7000iS is designed for hard and heavy usage. It can be run constantly, an is designed to withstand exactly this.

The Eu7000iS from Honda isn’t a massive generator either considering the power that it’s able to put out. It’s compact and easy to use. It’s got a control panel fitted to the front of the unit that’s easy to interpret and use. It comes fitted with the features that a generator of its caliber should, including an electric start button, and an LCD screen.

There’s a good variety of power outlets on the EU7000iS. There are two regular household 110V sockets and a further GFCI 110V outlet. To the left of the control panel, there’s an outlet that can operate at either 120V or 240V. The power output of this outlet can be easily changed via the switch underneath it. This makes for an easy-to-use, quick power socket.

The EU7000iS is powered by gasoline. It uses its fuel well and is an efficient unit. It’s able to get a very good amount of power from a little amount of fuel. If you’d like to get even more fuel economy, Honda has installed its “Eco-Throttle” system which can be toggled on and off. This makes the generator operate more efficiently, but at a lower speed. The generator isn’t going to perform to its maximum potential whilst being in eco-mode.

When the eco-mode is in use, the fuel consumption of the generator is twice as good. It uses half of the amount of fuel that would be used in normal mode at full power. If you’d like as efficient an operation as possible 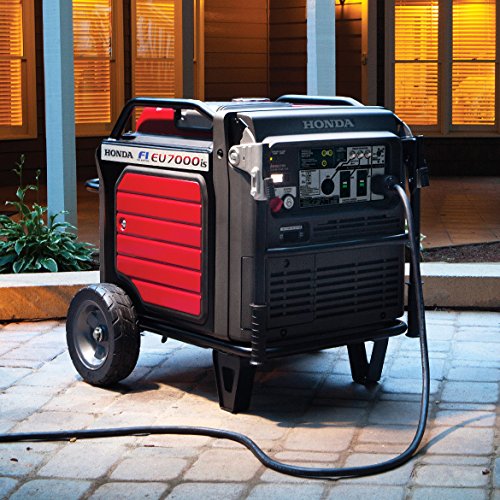 and don’t need the full power potential of the generator at all times, it’s a handy fuel-saving feature to have.

Unlike a lot of other generators of its size, the EU7000iS is an inverter generator. This means that it’s able to output clean, safe power that’s suitable for powering smaller, and sensitive electronic devices.

The power output by the EU7000iS has less than 4% harmonic distortion, which is extremely low. This factor in our opinion increase’s massively the versatility and overall attractiveness of the generator. The power that it outputs can be just as easily used to power a large heater, as it can be to charge a mobile phone or camera.

Overall, the Honda EU7000iS is a durable generator that’s able to offer the clean power that smaller generators usually specialize in, as well as the large amount of power that larger generators can.

It’s reliable being made by Honda and is extremely well reviewed. It’s a generator that’s designed to be used heavily and is of great quality. However, the price does reflect this. If you’re willing to invest in a unit that’s going to serve you well and for a long time, it’s the one to go for.