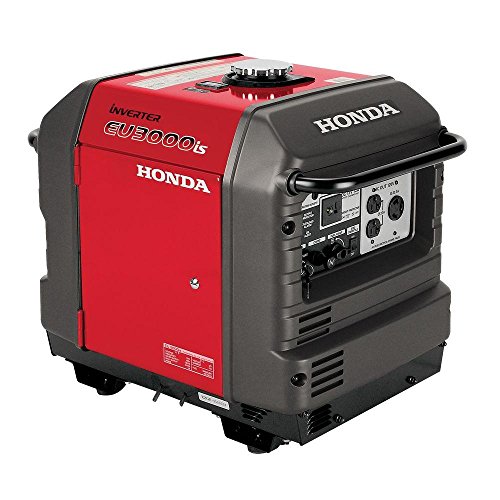 The EU3000iS is a powerful 3000 watt generator that’s made by Honda. Honda have been a name associated with high quality and performance since the middle of the last century. They are well-known for making top quality products related to engineering, movement, power, and all things similar.

Honda have produced power products such as cars, boats, tools, and generators for many years – they are certainly at the forefront of power-driven engineering in the 21st Century. As well as producing an uncountable amount of amazing products and machinery in their operation time, Honda have and still continue to come up with amazing new technologies and concepts.

In the world of power generation, Honda keep their values of high quality and performance at the forefront of their efforts. Honda make a large variety of generators all for different uses. They have all of your smaller amounts of in-home and garden power needs covered, as well as heavier industrial machinery power requirements.

Even though the Honda 3000 generator is a larger 3000 watt generator, it is still more than suitable for powering smaller appliances that should not be subject to massive electrical currents – such as phones, cameras, and laptops. However, due to its impressive power output it’s still good to power larger appliances such as hoovers, televisions, and microwave ovens.

The EU3000iS is good to power larger appliances in the garden too, as opposed to its smaller counterparts.

Whilst the EU3000iS from Honda is not the cheapest generator in its class, it is arguably the best and is extremely quiet.

It weighs in at 131 pounds. It’s not exactly light, but can be moved by two people easily. It has suitable carrying handles fitted for this purpose. The weight of this generator is in many ways advantageous however. It’s strong and sturdy, and will always be well grounded no matter the elements. If you are not able to move the generator by means of two people, Honda have thought of this too. There is a wheel kit that you can buy, which means far better portability of the generator should you require it!

This unit from Honda isn’t a task to maintain like many others on the market either. It’s certainly advisable to only use parts that are genuine if you’d like to have your EU3000iS for as long as possible though. It’s also important to remember to perform simple maintenance tasks regularly on your generator to make sure it serves you for as long as you’d like it too. For example, one of the best maintenance steps that you can do on your EU3000iS is simply making sure it’s clean after the engine has cooled down from operating temperature.

The EU3000iS is started easily by the turn of a switch, meaning that you don’t need to worry about pulling cords.

The capacity of the engine in this great Honda unit is just short of 200cc. This is by no means a small engine and it pushes out a fair amount of power – but without the corresponding noise that you’d expect from an engine of its size. It operates at just 58 decibels when being used at full power. This is truly amazing as this level of noise is around the same as a regular conversation between two people. If you’re planning on using this generator in a situation that quietness is a must, it will without doubt serve you well.

So, should you spend your hard-earned money on the Honda EU3000iS? In our opinion, absolutely yes! Not only does this amazing unit from Honda offer an absolute wealth of features, it’s also fairly priced and as with any Honda product, easy to maintain. If you’re looking to power smaller appliances regularly as well as larger ones, the EU3000iS is the perfect choice due to its advanced inverter, that allows it to provide smooth and reliable power to devices of all sizes, without you having to worry about them being shocked by large uncontrolled doses of power. It’s also an unbelievably efficient generator. When you actually take into consideration the amount of money that you’ll be saving in fuel due to the sheer efficiency of this generator, as well as the reliability factor, your money will be more than well spent on an EU3000iS.