Firman is quite a new company in the industry of power generation. This does not, however, mean that they should be overlooked. At the present time, Firman is moving strongly into the market of generators.

As a company, they are becoming more and more popular. They have a large number of generators on offer, each of a different type. Firman currently makes inverter generators, portable generators, as well as larger more powerful generators and dual fuel options too.

In this post, we are going to take a look at a number of different options of Firman generator. For each, we’ll look at what’s good about the product, as well as provide an unbiased opinion on what could be improved. 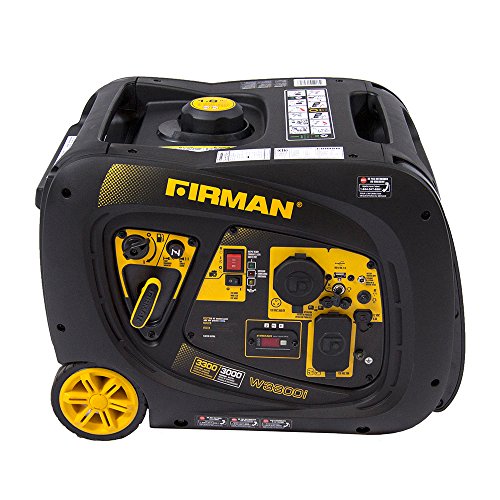 Generally speaking, inverter generators are more refined than those that are made without inverters, and they are able to safely power all electronics – no matter how small or sensitive.

The W03082, although very modestly-priced, does not compromise in either starting or running power. It’s got a starting wattage of 3300 watts, and a running wattage of 3000 watts.

It’s parallel capable too, meaning that you can easily couple up the unit with another Firman generator, in order to get a larger total power output. This is particularly useful if the maximum output of 3300 watts isn’t enough to power a certain appliance.

The parallel connection can also be used simply to place less strain on one unit.

The W03082 is very quiet and refined. When it’s under load, it manages to operate at only 59 decibels. For reference, this is roughly the noise level of a standard conversation between two people.

It’s efficient too, being able to give out up to 9 hours of power from its 1.8 gallon gasoline tank. This power is then split amongst a good selection on power outlets. On the Firman W03082, there is an RV-Ready TT-30R outlet, a 120V 30A outlet, a 5-20R duplex 120V outlet, and a 12V charging outlet. They have also included a USB charging port since this inverter generator is capable of powering even the most sensitive of electronics.

The generator isn’t exactly light, at 96.8 lbs. However, it does come supplied as standard with a folding handle and wheel kit. With these, the Firman W03082 is a very portable unit indeed. The tires on the W03082 are designed to be able to be pulled over rough and tough terrain too, without suffering from punctures.

For what’s meant to be a budget brand, Firman really has added an awful lot of features to this unit that usually tends to be found on more expensive generators. For example, it’s fitted with an electric start as well as a backup recoil starter. Other brands often only include electric starting options on their most expensive options. It seems to be quite standard with Firman.

The efficiency of this generator is largely due to the fuel-efficient economy mode that Firman has installed. When this mode is engaged, the engine within the generator only runs at the speed that’s necessary to provide however much power is being used at the current time. It’s also fitted with a “Phoenix Fat Head Block” for maximum compression within the engine, and therefore maximum fuel efficiency.

It’s fitted with a 171cc that’s made by Firman, and it’s covered by a 3-year warranty too. The 171cc engine is kept quiet with an advanced whisper series muffler, allowing the unit to run at only 59 decibels.

It’s very encouraging to see that Firman doesn’t seem to have cut any corners with the W03082 either, supplying the unit with a number of accessories that aren’t often found with cheaper units. It comes as standard with oil, a spark plug wrench, a funnel to making adding fluids to the engine as easy as possible, as well as an informative and easy to read manual. 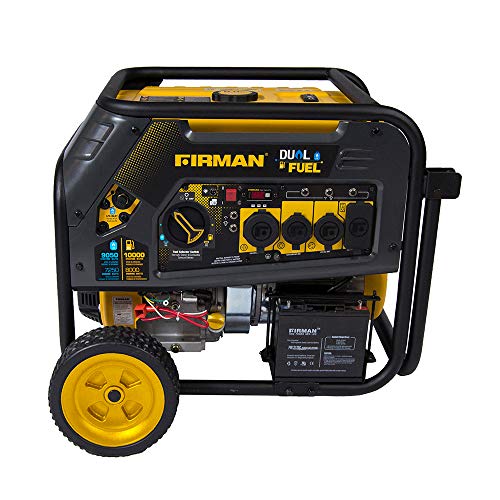 The H08051 is a dual-fuel generator made by Firman that’s very powerful. When running on gasoline, it’s got a massive starting wattage of 10,000 watts and is able to output 8000 running watts.

As with any dual-fuel generator, you as the user has the option to use either gasoline or propane gas as fuel options. This means that the generator is able to be used in a number of situations. Propane is a great fuelling option to have – it doesn’t have a short shelf life like gasoline does, and is safer to carry around if you plan to transport the generator in the back of a vehicle.

Just like other Firman generators, the H08051 is able to boast a lot of high-end features. It’s fitted with an automatic low oil level detection and shutdown system. This system detects when the oil level becomes dangerously low, and stops the engine from running at this point. This safeguards the engine against long term damage.

Alongside a large variety of power outlets on the control panel, there’s a voltmeter, as well as an hour meter that gives an estimation of how much time is left in the current fuel that’s in the unit.

As with the W03082, the H08051 uses one of Firman’s “Whisper Series” mufflers in order to keep operating sound to a minimum. The H08051 also has dust and dirt protection on all of the power outlets, ensuring that the life of each is as long as possible. This feature adds to the overall durability of the generator, as well as the flexibility of the locations in which it can be used.

The H08051 is a very powerful generator. It’s designed for heavy use and is very durable. It makes for a great choice if you’re looking to use the generator on, for example, a construction site. It wouldn’t be ideal as a portable generator, however, as it’s quite heavy at 221 pounds in weight.

The W03082 is not just one of our favorite Firman generators, in our opinion, it’s one of the best value for money generators that’s available on the market. It’s got all of the features that more expensive generators have, and even looks an awful lot better than most. It’s powerful, portable, and is able to deliver extremely high-quality power.