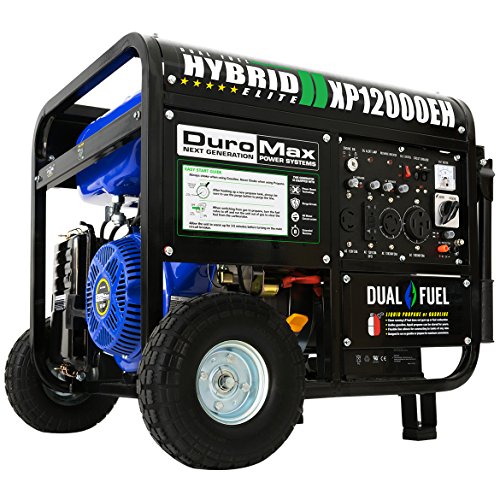 The Duromax XP12000EH is a dual fuel generator. It can run on either standard gasoline or propane gas. A dual fuel generator is a great thing to have for many reasons. If you’ve got a gasoline generator for example and you run out of gasoline, you don’t have many options left. However, if you have a dual fuel generator that you’re running on propane with gasoline as a backup fuel, your chances of having a reliable source of power are much higher.

The DuroMax XP12000EH is one of the most powerful generators that’s still portable available. When running on gasoline, it’s got a maximum power output of a huge 12,000 watts, and can provide continuous power of up to 9,500 watts.

When running on propane gas, it’s still able to provide a huge peak power of 10,200 watts, and continuous power of up to 8075 watts.

Considering the XP12000EH has a giant 9,500 watts of continuous power available, it can power almost anything that you might throw at it around the home. Due to its heavy and hardwearing design, it’s great for powering large appliances or machinery at a construction site for example too.

The XP1200EH could be used as a backup power source for your home as well, should you lose power due to adverse weather conditions for example. Duromax has considered this and designed the XP12000EH so that it can be connected to the main power of your home using a transfer switch.

The XP12000EH is built within a heavy-duty steel frame. It’s got 4 mounting points that make it easy to get into a secure position anywhere. It’s got a wheel kit attached that is heavy duty and of high-quality, making it ideal for taking over rough and uneven ground surfaces. The wheel kit is essential for the portability of this generator.

On the front of the unit, there’s an informative and easy-to-read control and information panel, providing information on how much power is being used, a voltmeter, as well as various safety features such as circuit breakers and low oil level warning lights.

There are many great points that make the DuroMax XP12000EH a very refined unit. These include electric starting capabilities, automatic 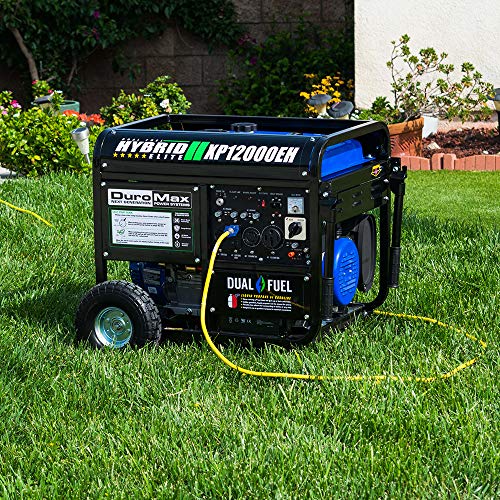 shutdown should the oil level become dangerously low, as well as high-quality mufflers that ensure the generator is quiet. It operates at a mere 74 decibels, which is very impressive for a unit that’s giving out 12,000 watts of power.

It’s got power overload protection as well, meaning the engine halt should the generator become too hot, avoiding any serious long term damage and risk of fire.

Should you spend your hard-earned cash on the Duromax XP12000EH? In our opinion, yes. It’s an extremely powerful generator that packs a wealth of features. It’s well-priced, and most importantly well-built and safe due to the large number of safety features that have been implemented by Duromax.

There a huge variety of power outlets fitted on the XP12000EH, and it’s great to be used in many different situations. It’s got a massive starting wattage of 12,000 watts, and it’s versatile and suitable for use in just about any situation that you could think of.

It will comfortably provide backup power for your home, or even just a number of small appliances. Another great advantage is offered by the multiple power outlets on the generator in a situation such as this – many devices can be powered at the same time as opposed to having to change between which ones are plugged in.

On the other hand, it’s power capabilities are more than enough to power large items of equipment on a building site.

The XP12000EH is truly a great all-around generator. It’s easy to use, offers a great amount of quality power, and is great value for money.