The Briggs & Stratton Q6500 is a very powerful generator that’s able to be used as a backup or standby home generator, in order to provide power to those essential appliances in and around the home in the case of an emergency/power loss.

The great factor that sets the Q6500 apart from the rest of the generators available that can provide home backup power, is its potential to be easily portable. It comes with a wheel kit fitted to it as stock. It’s also safe to use with a variety of electronics since it’s fitted with an inverter. 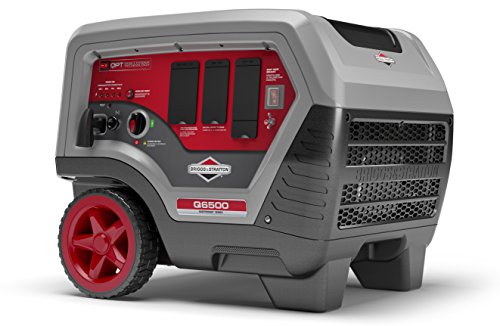 has a surge wattage of 6500W, and a running wattage of 5000W. Since it was designed mainly to be used as a backup generator, it is both efficient and refined – just as a good home backup generator should be. However, these are great qualities for a portable generator to have too, as you will undoubtedly know.

The fuel tank built into the Briggs & Stratton Q6500 is 5 gallons in size. The efficiency of the generator is very clear from the runtimes that it provides – from one tank fuel, the Q6500 will keep running at 25% load for more than 13 hours.

The control and information panel of the Briggs & Stratton Q6500 has been designed with the ultimate usability in mind. It’s ergonomically designed, with the gauges and sockets being intuitively positioned and easy to find. It’s got a meter that shows how much power you’re currently using (i.e. how much power the Q6500 is putting out at that point in time), and a fuel gauge. Whilst you might think that these are common features, they are not. An accurate fuel gauge such as the one on this Briggs & Stratton unit provides confidence that you are not going to unexpectedly run out of power at any time.

The Briggs & Stratton Q6500 is fitted with a very advanced inverter. This inverter ensures that the power that is produced by the generator is clean, safe, and reliably stable. The current that comes from the Q6500 is safe for use with all appliances, even the smallest and most sensitive. This is due to the fact that it has less than 6% harmonic distortion.

The Briggs & Stratton Q6500 is a powerful inverter generator. It’s suitable for powering a large variety of devices, from devices as small as phone batteries to appliances as powerful as drills. It’s a very sturdy unit at 128 lbs and is sure to be well-grounded wherever you use it. However, it may be difficult for one person to move around.

It’s kitted out with the equipment that it should have, including a power usage meter and fuel gauge. However, it does lack an electric starter which is often found on generators in this power band.

Overall, the Briggs & Stratton Q6500 is a great unit. It’s powerful, it has an inverter, and is well priced at $1200. It’s very easy to use and can be moved around easily by using the wheel kit and handle.

If you’re interested in the Briggs & Stratton Q6500, you may also be interested in our full review of the Honda EU7000iS – another powerful inverter generator.