Having a portable generator out on a boat can make the whole experience of boating very different. If you’re on a boat that doesn’t have power built-in internally, having access to typical appliances and devices can be difficult or impossible.

A generator can even allow you to have a fully operational kitchen on your boat – you could power a kettle, toaster, or an oven. It can also provide electricity for more essential appliances too, such as a heater or air conditioning unit.

A generator doesn’t just serve as a luxury piece of equipment on a boat – it can power lights, and even provide a backup source of power or your boat should the engine’s battery die overnight, or whilst stationary.

It is extremely important to remember however that using a generator on a boat carries its own risks – it can be very dangerous, and you should, therefore, make absolutely sure that you are aware of the risks that exist and how to combat them, before you take a generator aboard a boat.

In this article, we’re going to cover the generators that we think are the best for use on a boat. We’ll have a look at why, the downsides of each generator, and also provide some general unbiased buying advice.

A generator that you are looking to take aboard a boat should have a couple of key features, that should not be overlooked. For example, it should be quiet and lightweight. These are two particularly important factors to consider.

It’s likely that, if you’re taking a generator aboard a boat, the boat in question isn’t going to be all that large. Bigger boats tend to have electrics built-in. For this reason, weight is a big factor. Taking a massively heavy generator onto a boat is simply not a good idea, for obvious reasons.

The WEN56200i excels in both of these areas – it’s very lightweight, and is extremely quiet.

The 56200i has got an efficient 80cc engine that’s able to output 2000 watts of peak power and provide 1600 watts of continuous power. It’s fitted with an inverter too, making the power that it outputs very safe to use with all devices.

The inverter within ensures that the 56200i has minimal harmonic distortion and that it’s delivered smoothly and reliably. It’s very lightweight and easily portable too, weighing less than 50 pounds and having a carry-handle built in.

The main selling point of the WEN 56200i, however, is that it operates while producing just 51 decibels of sound when being used at 25% load. When running at 75% load, it still only makes 55 decibels of noise – this is quieter than the vast majority of generators whilst running at a quarter load.

The 80cc engine that’s fitted in this generator is both CARB and EPA compliant. It can, therefore, be used in all states and doesn’t have an unnecessarily large impact on the environment. 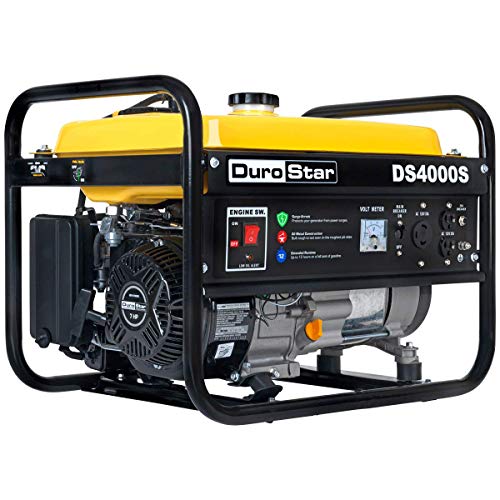 The DS4000S from Durostar is a powerful gasoline-powered generator, with a peak wattage of 4000 watts, and the ability to produce 3300 watts continually. The DS4000S is powerful, modestly-priced, and offers a number of features that tend to be found on more high-end generators.

As with all generators, there are some good things as well as some points that could be improved. Fortunately, the DS4000S has a great number of points that make its place on our list of the best cheap generators well-earned.

DuroStar is a brand that has always been well known for providing high-quality products, at a fair price. The DS4000S is designed to be as usable as possible whilst maintaining high build quality, and vast reserves of power.

The DS4000S is fitted with a traditional pull start that has been designed to be as easy to use as possible. Often, users complain about recoil starters. The recoil start on the DS4000S has been very well reviewed, what’s that it is easy to start on cold days and after it has not been used for quite a period of time. A lot of the time, an electric starter is favored over a recoil starter. However, a generator that’s being taken aboard a boat should be as simple to use and fix as possible.

The DS4000S comes fitted that detects when the oil level in the engine becomes too low. If this happens, the generator is automatically shut down – this feature prevents major engine damage and the occurrence of large repair bills.

The control panel on the 4000S is very ergonomically-designed, with ease of use in mind. There is a voltmeter as well as a fuel gauge on the control panel, both of which are great features to have. These allow you to see how much power is being used at the current time by what’s plugged into the generator, as well as how much fuel is left.

When using the DS4000S on a boat, the fuel gauge is particularly useful. If you don’t have additional fuel on-board, you can adjust your usage of the generator accordingly to conserve fuel.

The DS4000S isn’t the lightest generator on our list, but it’s not exactly heavy either, weighing 94 pounds.

The generator is built in hardwearing steel encasing which means it can be easily moved around without worrying about breaking it. The portability of this generator is increased with the wheels, but these can’t be easily used on a boat, if at all.

The WEN56200i is a great generator for boat use. It’s lightweight, very portable, and the electricity that it provides is of high-quality due to the inverter that it has installed. It’s CARB and EPA compliant too, meaning that it can be used in any state of the USA, no matter where on your boat you are.

The DS4000S is a portable generator that’s very powerful. It’s a lot more powerful than the WEN56200i, being able to output 4000 watts of power. That said, even though the generator is very portable when being used in conjunction with its wheel kit, this is not going to be possible on a boat. It is therefore very heavy, and even too powerful for a number of smaller boats.