A 7500-watt generator is a great size of a generator to choose to purchase, for many reasons. Arguably, it is the best sized middle-ground generator that’s available. Why? This is due to the fact that whilst many of the units that are available in this power band remain very portable, they are also extremely powerful and able to power a large amount of more heavy-duty appliances at the same time when being compared to other smaller portable counterparts.

Of course, generators that are 7500 watts are inevitably not going to be “as” portable as say one that’s 2200 watts, but this doesn’t mean to say that it’s not still going to be easy to move around. A generator that’s got a power capability of 7500 watts is a fantastic unit to have in your inventory, especially as a small business owner that needs mobile power for example. A 7500-watt generator will have all of your needs covered.

In this article, we’re going to have a brief look at a couple of the 7500-watt generators on the market that we believe to be the best, for a number of reasons. For each product that we recommend, we’ll go into detail on why we like the generator, as well as what we think could be improved. 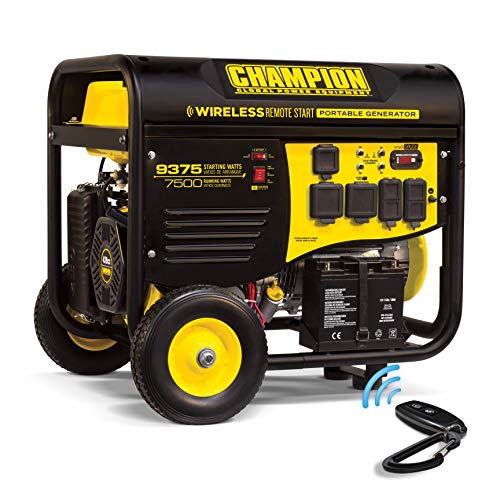 As you may or may not already know, generators that are made by Champion tend to come with a very high build quality, and fantastic safety ratings. In this case, the Champion name is well displayed indeed.

The 7500-watt dual fuel option that Champion has developed is a powerful and flexible generator, in that it is both portable and very powerful. It can also be powered by either gasoline or portable gas, which means extended engine life, and greater flexibility in terms of fuelling.

The Champion 7500 DF has a 439cc engine installed that allows the generator to produce an enormously impressive starting wattage of 9375 watts. This Champion will provide continual power of up to 7500 watts, too.

This unit is very economical in terms of fuel usage. When running on regular gasoline, the 7500 watt Champion will keep going for up to 8 hours from a single tank of fuel – this is the fuel that allows the generator to run at its very maximum potential. If you’re looking to fuel this Champion with propane gas, you won’t be hit with a lack in power either. Propane still allows the 7500-Watt DF Champion to have a maximum output wattage of 8400 watts, and a running wattage of 6750 watts. 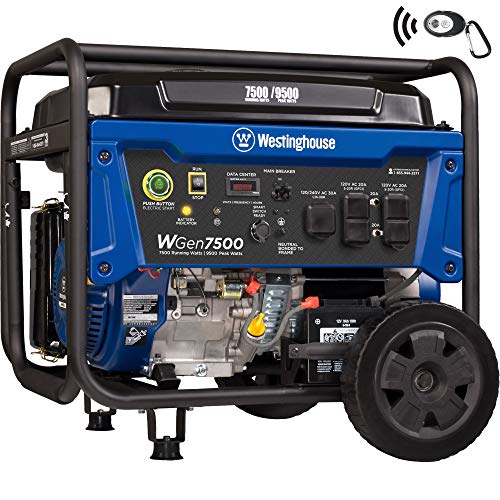 The Westinghouse 7500 watt generator is a powerful generator, with 9000 watts of starting power available. The WGen7500 will keep running for 18 hours from its 6.6-gallon fuel tank. The power that’s available from this generator, coupled with the engine’s efficiency and the time that it will keep running for mean it makes for a great home backup generator. Whilst this generator might not be suitable to use on a more permanent basis to power your home, it is certainly up to the task of powering your home’s appliances in the event of a power outage.

The Westinghouse WGen7500 is a very easy and informative generator to use. It is fitted with a system that automatically detects the oil level in the generator’s engine, and shuts it down if it is too low to prevent engine damage. The power outlets on the generator are also protected from overloads, in the event that too much power attempts to pass through one of them.

The honest truth is that both of the generators that we have reviewed here in this article are fantastic 7500-watt generators, and both will do the job very well. However, we’d have to say that our favorite is the Westinghouse WGen7500. It’s packed full of advanced features from Westinghouse, and it’s also a fair bit cheaper than the alternative Champion 7500-Watt Dual Fuel. The main difference between these two units is obviously the fuelling options. If you’d like a dual fuel generator that can produce 7500 watts of power and still be moved around, the Champion is the one to go for. If you’re looking for an extremely high-quality and efficient 7500-watt generator that has been built to last by quite possibly the best name in the business, the Westinghouse WGen7500 is the way to go.