If you are looking for a good source of power on the move, a 30 amp generator can be a great option. In this post, we are going to take a look at a few of the best 30 amp generator is available and what they have to offer.

Choosing a good generator can be a challenging task, particularly if you are not all that informed on what features you should and should not be looking for. For each generator that we recommend, we will look at the various design aspects, performance, noise level and value for money.

The P3000 is fitted with a handle fitted and wheels that make it very easy to move around to any location. The wheels on this generator have been specifically designed to not suffer from punctures too.

The P3000 has a maximum output wattage of 3000 watts as well as a running power of 2600 watts. It’s got plenty of power to keep an RV heater or similar running, as well as larger appliances around the home and garden.

When under 25% load, the 171cc engine and 1.5gal fuel tank will keep the generator going for more than 9 hours.

The P3000 has a screen fitted to its control panel that informs the user of various important numbers. These include the power being output by the generator, and a number that shows how many hours are left from the current fuel load – this number is based on current usage and should not be taken as a definite.

As a result of the inverter within the P3000, the power that it outputs s extremely safe for use with a variety of devices. It’s got less than 3% THD. 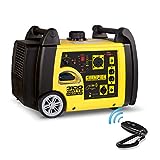 The Champion Power Equipment 75537I is a gas powered inverter generator. It’s got a great number of features, such as electric starting and low oil level detection. Champion is well-known for making high-quality units that are as safe as possible to use – the 75537i upholds this reputation pretty well in our opinion.

The 75537i is portable, weighing in at 95 pounds. If this is a bit too heavy to lift, it also comes fitted as standard with wheel kit and handles. , being fitted with tires that resist puncture. The 75537i is therefore very versatile in that is can be moved over a wide variety of terrain.

The 75537I a very quiet and refined generator too. It runs at only 58 decibels due to the mufflers and soundproofing fitted by Champion.

Since it’s an inverter generator, the power from the 75537i is suitable for powering all sizes of device or appliance.

The EF3000iS is an extremely quiet and refined generator from Yamaha. The EF3000iS looks quite different from a number of other generators that are available. It’s fitted with two handles on the top and has a very modern-looking design.

Weighing in at 136 pounds, the EF3000iS is by no means a lightweight generator. This doesn’t mean that it’s not portable though, it comes fitted as standard with four wheels that make for easy movement.

The main factor that sets the EF3000iS apart from its competitors is the performance that it has on offer. It’s got an extremely efficient 171cc OHV engine, that’s able to run for a staggering 18 hours from one 3.4 gallon tank of gasoline. Out of all of the generators that we have reviewed here on Best Generators, the EF3000iS is among the most efficient.

The EF30000iS has 3000 surge watts and 2800 watts of running power. It’s very quiet too, operating between 53 and 60 decibels. Yamaha has installed advanced soundproofing to ensure that this is the case.

The Briggs & Stratton P3000 is a great portable 30A generator for use alongside an RV. It’s very popular with campers as it’s portable, isn’t too heavy, and is very powerful. The power that it puts out is of high quality too. It’s also fitted with some very nice and uncommon extras, such as an LCD screen. It’s very well-priced too, at $800.

The Yamaha EF3000iS is by far the most efficient generator on our list. It is our favorite 30A generator, mainly due to its unbelievable efficiency. It’s got a staggering runtime of up to 18 hours. For generators in this power category, this is especially important. The EF3000iS isn’t by any means a cheap unit, but it’s an investment that will pay off.