Generators that are in the power region of 15,000 watts are very large, and very powerful. They are generally and often designed to provide home backup power. However, there are portable generators that are available in this large power band.

In this post, we’re going to take a look at some generators that are able to put out 15kW of power, but that are also portable. For each generator, we’ll look at the maximum power and running output, as well as features which it has, and why we like it. We’ll also give you our opinion on the downsides of the generator. 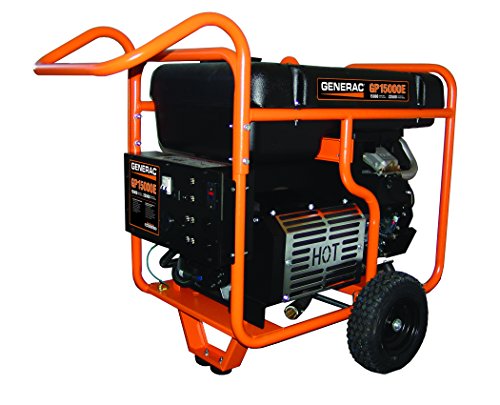 The Generac 5734 is the first of our generators that can be moved around, but that is also extremely powerful. It comes encased in a heavy-duty steel frame that makes sure the generator is as quiet and as free of vibrations as is possible.

The control panel on the GP15000E is very well designed indeed. It’s simple to use and has a variety of power outlets. It’s got two normal 120V sockets, as well as a further two 120V AC GFCI outlets, and a 120V twist lock outlet.

The GP15000E is a refined and easy-to-use unit. It’s fitted with an electric starter, and also has a standard recoil starter for backup purposes. Generac has made sure it’s as quiet as possible too.

The GP15000E is an extremely sturdy and heavy unit, weighing in at a large 373 pounds. It cannot be carried or lifted by one person individually. However, it comes with a full durable wheel-kit and handles, that allows the generator to be moved between different locations with ease. The tires fitted on the GP15000E are known as “all-terrain,” too.

There are a good amount of safety features fitted to the GP15000E. All of the outlets on the unit are protected with a circuit breaker, meaning that the power will be automatically stopped should an overload occur. It’s got automatic idle control, as well as a fuel gauge

The 5734 is an extremely fuel-efficient generator. From every 16-gallon tank, it’s able to run for 10 hours at 50% load. Some customers have even said they have had up to 16 hours of power from one tank of gasoline. 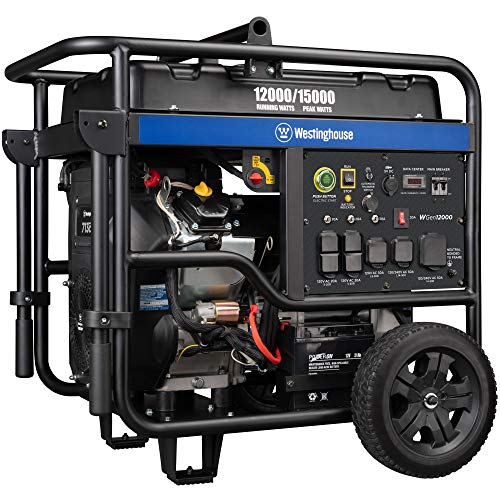 The Westinghouse WGen12000 is a generator that’s been primarily designed for heavy-duty usage on places such as construction sites. It’s got a maximum starting power of 15,000 watts, and a running wattage of 12,000 watts.

Due to the large amounts of power that the WGen12000 has available, it could also be used as a home backup generator as well as a portable generator. It’s very versatile indeed.

Westinghouse is a very well-known, or arguably the most well-known name within the power generation market. They were the first company to ever make a generator, and have kept making more and more modern generators over the years. The “WP” series of generators by Westinghouse has been designed to compete against other brands that are making generators for the more industrial side of the market. Westinghouse managed this very well.

The large 713cc V-Twin engine that’s bolted into the WGen12000 is very powerful. It’ got a comfortable amount of starting power and 22hp to deal with multiple tools starting up at the same time. This engine is EPA and CARB compliant, allowing it to be used in all states of America.

It’s fitted with a low oil level detection and automatic shutdown system. This ensures that the engine is never permanently damaged due to a lack of oil. It’s pretty quiet too, at 74 decibels. It’s of course also fitted with an electric starter for the ultimate convenience and ease.

Efficient fuel-usage and runtime are essentials points that generators that have been designed to work on a construction site should have. The engine that’s in the WGen12000 is very efficient, offering 16 hours runtime when being used at a quarter load, and 11 hours runtime when being used at half capacity. These are very respectable runtimes indeed from a generator that’s pushing out 15,000 watts of power.

The WGen12000 is fitted with an automatic voltage regulator. This means that the total harmonic distortion level that’s present in the output current is less than 5%. It’s extremely low, making for very high-quality power. This level of THD is not quite as good as what a small inverter might be able to offer, but it is still very low. The power is safe to use with all electronics.

The Generac 5734 has more than enough power to start very large tools and pieces of equipment. It’s got a massive 22,500 starting watts. It’s efficient with a runtime of 10 hours at half-load and is very safe having circuit breakers fitted to all power outlets.

The Westinghouse WGen12000 is a fantastic and very powerful unit. Whilst it’s not got the quite as much starting wattage as the Generac, it’s a very capable unit that is extremely efficient with a runtime of 16 hours. In our opinion, it’s the bet 15kW generator that money can buy.